Why I don’t live in the West

In July this year, I will have spent 10 years in Asia – from Cambodia to South Korea and then to Pakistan, where I currently live.

People tell me all the time here in Pakistan: “Everyone here wants to go there, so why would you want to come here?” It drives me absolutely bonkers, because most of the assumptions that lead to it are quite simply untrue. More than that, it reflects the fundamental lie that the west has sold to the world, which is that the west is best, and everyone else needs to be like us (except, of course, that you never can, because the ‘natural’ west is always superior).

Does that sound familiar?

If it does, it’s because it’s essentially the entire philosophical grounding upon which the atrocities of colonialism and imperialism were conducted, and more or less a strong contributing factor for today’s ‘developing/developed’ horribly unequal global power structures.

I’m getting distracted. I’ve wanted to write this essay for awhile, but I usually get so upset just thinking about it that I don’t get the words out.

So let’s go backwards a bit, to this statement that people make about everyone wanting to go there.

The Myth of Western Superiority

More or less, what they mean is, and sometimes they say out loud, isn’t it better there?

To which I always want to ask, better how? For whom?

People think everyone is educated in the US. That they are rich, or live comfortably. That they can afford their own houses, and that people from everywhere get opportunities. Or most, when it comes down to it, they think the weather is always nice and the power never goes out. Or perhaps it’s about the clean streets.

In their minds, I think, everyone is white.

It’s not their fault, kind of like it’s not really my fault that when I first left the US, I was a pretty typical privilege white savior type. I didn’t know any better; my education, like most Americans, focused heavily on US history, a wee bit of European history, and that was about that. America was the center of the world, its culture global. It was all I knew.

The American/European/western propaganda machine is strong.

I try to explain: if I lived in the US, I might have some nice appliances and have a tiny little apartment where the power never goes out. But as a dancer, I would be struggling as much as anywhere, waiting tables on the side and joining the masses of hopefuls at auditions. I would be writing grants and trying to find funding. I’d be hustling, like I do here. If I ever got sick or injured, I’d be in huge amounts of debt from healthcare costs. There is nothing fundamentally better about that life than here.

And again, I ask: better for who?

Let’s just talk about how the dollar is strong in the international market and how the power never goes out.

The colonial media machine has sold the world a big fat lie of western superiority. It has claimed everything that is ‘good’ and ‘universal’ as western (humanitarian aid, anyone?), and discounted any other society which may have advanced faster than itself. What it lacks in spirituality, it has exoticized and mystified as the imagined “Orient,” and this the Orient the west has constructed for its myths – is about as real as Santa Claus.

Before I went to South Korea, people called it more western. I think they did that because Seoul is highly developed and so-called “international” which by default means “western.” But South Korea is not western, unless you choose one small district in Seoul (Itaewon) as a case study and ask some expat English teacher who never really interacts with Koreans (they’ll be happy to tell you all about how the Korean culture is frustrating). It is advanced, that’s for sure – wifi on the subway, incredible infrastructure, good government funding – but it is not western. I learned that pretty quickly.

So again: why don’t I live in the west?

At the beginning, it was for the energy: in the west, everything has been done. It’s moved in a jaded post post post modernism where nothing new can be done, where everything has to be put in museums and protected and codified. The places where I’ve lived, however, everything is to be done. It’s not that it hasn’t been done before – maybe it had, before colonialism, or before some political regime – but that’s not the point. Everything is ahead. The focus is on what can be done, what will be done. It is dynamic and exciting, and early on, I decided to extend my stay in order to experience more of that energy.

Now, 10 years later, it is still that – but it’s more. The more I travel, read, and learn, the more I realize how insidious and untrue this lie of western superiority is.

The fact of the matter is that the US and western Europe were built on structural racism, and continue today to thrive off it. Do you ever hear about the Native American experience of living in the US today? Of course you don’t – the European settlers and later Americans have spent the past 400 years trying desperately to eradicate their culture, their land, and generally pretend they never existed. Thanks to Black Lives Matter and other protests, the plight of Black people is coming back into the public eye, but otherwise, the Black experience is never discussed, celebrated, or shared as part of the story of why the west is so great.

That’s because the story of why the west is great is founded on the colonial justifications, which is a racial hierarchy of the world and the basis of white supremacy.

And it is wrong, in every single sense of the word.

That is why I don’t live in the west now.

Also, while it seems endlessly surprising to people here in Pakistan, I like living here. I like the energy. I like the exuberance. I like how I can do things and it’s new and exciting.

There’s a lot else to discuss and explain and justify – obviously, I have insane privilege here and thus it is easier for me to live my life than an average Pakistani woman. I know that, and I have to reckon with it. The first draft of this essay was just about that, and it’s still something I’m understanding.

I know that I have more to learn about the dynamics of privilege and power – and that’s also why I don’t live in the west. Here, I feel like I have as much to learn as I have to teach. I’m not here to colonize; yet neither am I here to be colonized. I am here to be here, to learn, to teach, to share, to negotiate. To investigate, in other words, what it could/might mean to live in a post-colonial way. 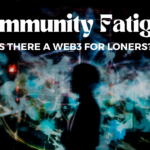 Communtiy Fatigue: Is there a web3 for loners?