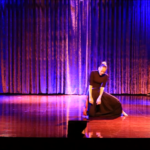 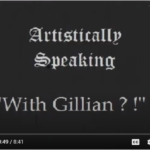 First Contact is a multimedia performance, blending digital light paintings projected onto the body. It is an experiment more than anything, but the story behind it is full of odd connections and good timing.

One of the things that happened during the lockdown was that I found myself hosting a live show on Twitch about astronomy and art. (I actually still do that, and it’s on almost every Monday at 10:30am Eastern at www.twitch.tv/cosmoquestx.)

One of my guests was the Croatian sculptor Milivoj Šegan. He has exhibited all around the world. Besides his sculpting and restoration work, recently he’s been working on what he calls “Lumino Mobile,” which are essentially digital light paintings. He uses scientific ideas and principles to make shapes with terra cota and bake them. Then he shines light through the shapes and takes photos with long exposures.

I found Milivoj through a Facebook group that the SETI Institute set up, called The Art Imaginarium. It is for artists who make art about space and proposes monthly challenges with a theme. I didn’t make art about space when I joined, but I thought it sounded interesting.

I thought Milivoj’s work was stunning and brought him to my show. A few weeks after that, Milivoj emailed me and asked if I would be interested in collaborating on something. He proposed projecting his images on my body as I dance.

It sounded like a great idea to me, but I didn’t have a projector at the time. I ordered one of a knockoff online Pakistani website, and while it was not exactly excellent quality, it did the job. I experimented briefly with it to see how it would look on camera and thought the results were interesting enough. We moved to the next step – what would the piece be about?

Because we were both in the SETI group, Milivoj proposed using the monthly challenge as our topic. At that point, it was a certain crater on Mars.

I agreed, but life got in the way, and by the time I was actually ready to film, it was some two months later. By then, the topic had changed to First Contact, which I thought was much more inspiring than a crater.

I had the idea in the shower, as one does. I had just returned to Pakistan after visiting my family, and was feeling confused and lost. Exhausted from the lockdown and a survival job that ate my soul, I hadn’t had a proper creative idea in months.

But finally, I figured something out. What if I portrayed I kind of creature, like the video itself was the first contact? I could film in my closet, which had a fully white background. I could also play with the size of the projection. It would be like humanity had snuck up on this creature with a video camera. The projections would create a kind of otherworldly feel, like I was a chameleon, or lived in a nebula.

The logistics of shooting it were complicated as I only have one tripod. I had to jerry-rig something for the projector. Good thing it was light – I used headphones as string to tie it up at one point.

After it was all done and edited, I was happy with how it turned out, and so was Milivoj. We may end up collaborating again, who knows!

Here is the final outcome – check it out and let me know what you think? What would be a good topic for further collaborations?